Obituary for Denzil B. Walker 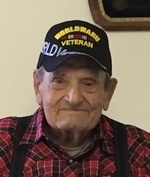 Denzil was born August 22, 1923, in the Victory neighborhood, near Redding, Iowa. He was the son of the late Blaine and Ruby Irene (Martin) Walker.

Denzil attended Victory Grade School, and the Redding Elementary and High School, where he graduated in 1941. He then attended the Johnson Business College in St. Joseph before entering the United States Army.

Denzil served in the 10th Mountain Division in Europe, seeing combat in Italy. He received both the Purple Heart and a Bronze Star during his enlistment. He was discharged in 1946.

Denzil was united in marriage to Virginia Mae (Lantz) on February 17, 1949. To this union six children were born.

Denzil farmed with his father after returning home from overseas serving his country. After 11 years of
farming, he and Virginia purchased the 169 Night Club which they owned and operated until 1974.
Later, he served a short time as Chief of Police for the City of Grant City. Denzil also worked as a
brush crew foreman in Worth County.

He was a member of the Worth County Memorial VFW Post 3123. Denzil had lived in his home until failing health saw him move to the Worth County Convalescent Center in 2012. Some of Denzil’s happiest days were spent on the red bench in front of Dennis’s Grant City Auto Parts Store visiting with all those passing by and watching all sports his grandchildren participated in.

Funeral services will be held at 12:00 PM, Tuesday, December 26, 2017 at the Andrews-Hann Funeral Home in Grant City. The family will receive friends from 11-12 PM Tuesday, prior to the services. Burial will be in the Athelstan Cemetery, Athelstan, Iowa. Graveside Military services will be under the direction of Worth County Memorial VFW Post #3123.