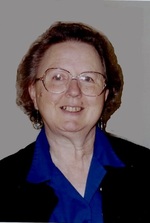 Betty was born on August 22, 1938 in Lytton, Iowa. She was the daughter of the late Benjamin Franklin and Elsie Maria (Brueker) Smith.

Betty was raised in Fonda, Iowa. She graduated from Fonda High School. She later moved to Texas and Arizona after her marriage to Robert Wilson.

Betty had worked in manufacturing most of her life. After her retirement she and Bob relocated to Grant City, Missouri.

Betty was preceded in death by her parents, husband Robert Lee Wilson (November 2, 2009), a sister Dorothy and a brother Dale.

Per her wishes Mrs. Wilson has been cremated under the care of Andrews-Hann Funeral Home in Grant City. A celebration of life will be held at10:30 AM, Saturday December 14, 2019 at the Denver Community Church, Denver, Missouri. A private family inurnment will be held at a later date in Cedar Cemetery, Fonda, Iowa.

The family has asked that memorials be directed to AseraCare Hospice, 301 East Price Ave. Suite B, Savannah, Missouri 64485.