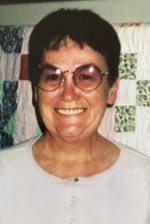 Charlene departed this life on December 19, 2019 at Maryville Living Center in Maryville, Missouri, at the age of 78 years.

Charlene was preceded in death by her parents, a brother Larry Lee Walker and a grandson, Brent Allen Lee.

She is survived by her sister Ramonia (Bill) Parman, brother Laverne (Linda)Walker, and sister-in-law Geneveive Walker, all of Sheridan, Missouri.

A Celebration of Life will be at 2:00 PM, Saturday, December 28, 2019 at the Sheridan Christian Church, Sheridan, Missouri. Private family Inurnment will be in the Isadora Cemetery near Grant City, Missouri.

Per her wishes, Mrs. Hinshaw has been cremated under the care of Andrews-Hann Funeral Home, Grant City.