To share your memory on the wall of David Parman, sign in using one of the following options:

Provide comfort for the family of David Parman with a meaningful gesture of sympathy.

David was united in marriage to Karla Raye McDaniel, December 26, 1979 at the Countryside Christian Church in Maryville, Missouri.

David grew up in the Sheridan Community. He was a graduate of Sheridan High School class of 1965. David received his BS in Industrial Arts and Physical Education/Coaching from Northwest Missouri State University. Being actively involved in the Sheridan community he was a member of the Sheridan Christian Church, Masonic Lodge, Lion’s Club and the American Legion. David also was the owner/operator of the Weekends Store in Sheridan.

David was a veteran of the United States Army serving with both the 101st Airborne Infantry in Vietnam and the 795 AG Company in Desert Storm and Iraq. His service for his country in the military spanned 34 years.

David coached and taught for 14 years in various Northwest Missouri Schools. He also had worked as a recreation officer with the Missouri Department of Corrections, before his retirement.

David was preceded in death by his father, sister Judith Pickering, a niece and a nephew.

Funeral services will be held at 10:30 AM, Friday, February 22, 2019 at the Sheridan Christian Church. Pastor Jeff Blaine officiating. Burial will be in the Sheridan Cemetery (VanSkyock Addition), Sheridan. Full military honors will be provided by the Worth County Memorial VFW Post 3123. Friends may call any time after Thursday, February 21 at the funeral home.

In lieu of flowers, memorials may be given to the Sheridan Cemetery or the Sheridan Community Building c/o Hann Funeral Home, P.O. Box 147, Grant City, Missouri 64456.

A Celebration of Life for David will be held for family and friends at 12:30 PM following the committal services at the Sheridan Community Building.

Receive notifications about information and event scheduling for David

We encourage you to share your most beloved memories of David here, so that the family and other loved ones can always see it. You can upload cherished photographs, or share your favorite stories, and can even comment on those shared by others.

Posted Feb 26, 2019 at 11:19pm
Karla, we only learned of David's passing this evening. Our thoughts and prayers are with you in the loss of David. He had the most distinct laugh, and we both recalled how much we enjoyed that laugh and his quick wit. We are grateful for his service to his country and for years of service in the school and prison system. Take care. Jane and Rick Dierenfeldt
Comment Share
Share via:
HH

Posted Feb 22, 2019 at 07:15am
Karla, sorry to hear of Dave's passing. I had not seen Dave since probably the mid-70's and I thought he was a really cool guy. Too bad it's been so long since we have seen either of you. Always heard about his long military service and being retired military myself, I honor his service to the nation. Take care and you're in our thoughts and prayers.

Posted Feb 21, 2019 at 01:57pm
Dave was a good friend since the days when he coached at Coffey. I worked with him at the prison in Cameron and enjoyed his humor, wisdom and advice. I will keep you all in my daily prayers.
Comment Share
Share via:
EJ

Posted Feb 21, 2019 at 08:11am
My heart goes out to the family for their loss. I worked with David during my early years with the Department of Corrections at Cameron. I always liked David and will miss him.
Comment Share
Share via:
TW

Posted Feb 20, 2019 at 07:45pm
I am so sorry to learn of Dave's passing but am grateful he is no longer in pain. I always enjoyed visiting with him and shopping in his store. Sheridan will miss him and all he did for the town. Thank you for all your years of service in our military and I pray you rest in peace.
Comment Share
Share via: 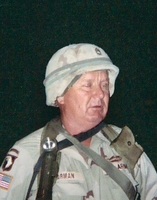