In Memory of
Donald Lee
Robertson
1935 - 2018
Click above to light a memorial candle. 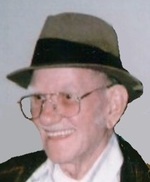 Donald was born March 23, 1935 in Darlington, Missouri. He was the son of Claude Lee and Ollie Edith Robertson.

Donald was united in marriage to Annie Reed. She preceded him in death.

Donald was the owner of Don’s Home Repair. He had done home repair and remodeling before his retirement.

Donald, a Christian, was baptized as a child in the Pleasant Hill Assemblies of God Church north of Allendale. Donald recently had rededicated his life to the Lord.

Donald’s body has been cremated. Memorial services will be held at 11:00 AM, Wednesday, August 15, 2018 at the Andrews-Hann Funeral Home, Grant City. Interment will be in the Miller Cemetery, Denver, Missouri.


Provide comfort for the family by planting a tree in memory of Donald Lee Robertson, please visit our Heartfelt Sympathies Store.