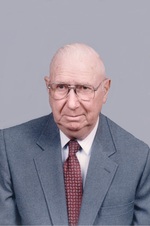 Jay was born May 21, 1925 at the family home in Isadora, Missouri. He was the son of the late Ivor and Edna (Barker) Shipley.

He was united in marriage to Ilene Nicholson on May 21, 1950 in Maryville, Missouri. To this union two boys were born Dale and John. Jay and Ilene spent most of their married life in Isadora, where they were engaged in farming.

Jay was of the Christian Faith and attended church regularly.

He was preceded in death by his parents, wife Ilene (2014), two brothers, Kelton and Neil Shipley and two sisters, Leota Batt and Maxine Wheatly.