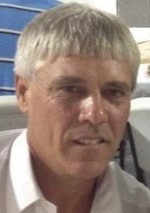 Jeff was born September 2, 1966, in Albany, Missouri. He was the son of Melvin and Kathleen (Mossey) Powers.

Jeff was a 1984 graduate of Worth County R-III High School, Grant City, Missouri. Jeff was employed with Magruder Paving Company, Troy, Missouri, where he was an asphalt plant operator.

Jeff was preceded in death by his mother Kathleen in 2012.

Mr. Powers has been cremated. Memorial graveside services and inurnment will be held at 10:00 AM, September 26, 2020 at the Oxford Cemetery, Oxford, Missouri. Pastor Bill Bracken will officiate the service. A celebration of life will also be held at 1 PM, Saturday, October 3, 2020 at Lake of the Ozarks State Park Public Beach #1 Shelter, Kaiser, Missouri.