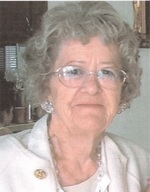 Lois was born May 7, 1927 in Detroit, Michigan. She was the daughter of Mr. and Mrs. Frank Gallin.

During her lifetime Lois had lived in Michigan, California and was living in Grant City at the time of her death.

She had worked as a clerk in the cosmetic departments for various retailers.

Lois was married to Richard C. Rosborough, he preceded her in death on
February 19, 2007. She also was preceded in death by her sister Eleanor Krupa and one niece Gaylin Krupa.

She is survived by one nephew, Douglas L. (Lois) Krupa, of Whitmore Lake, Michigan.

Mrs. Rosborough’s body has been cremated. Private memorial services will be held at a later date.