To share your memory on the wall of Marian Lynch, sign in using one of the following options:

Marian was born in Chicago, Illinois on July 13, 1929, the youngest child of Alfred an... Read More
Marian F. (Tolg) Lynch

Marian was born in Chicago, Illinois on July 13, 1929, the youngest child of Alfred and Gulia (Logan) Tolg. Shortly after graduating high school Marian headed west to the golden state of California where she worked for a phone company before having her first three children: James, Daniel and Kimberly (Page) Ezzel.

Marian then relocated for a time in Arizona, where she acquired her love for Southwest décor and art, before settling in Colorado in the 1960’s. There she married her best friend and partner for life, William (Bill) E. Lynch. From this marriage, Marian and Bill had three children of their own: Julie, Joni (James) and David Lynch. Marian and Bill started out their journey with their turkey farming and trucking business before resettling in Missouri in the early 80’s. In addition to Grant City, Marian and Bill also resided in Gainesville and Albany, Missouri.

Marian enjoyed her life as a homemaker and business partner to her husband Bill. Marian loved designing her own art and craft projects, landscaping, reading, traveling, keeping up on political events, and watching sports. She also enjoyed keeping busy and being productive with volunteer work. She contributed for a time to the “Looking Back” portion of The Times-Tribune and helped at Mission Possible. She also enjoyed studying and discussing the Bible and attending the Grant City Christian Church. Marian always carried a witty and humorous outlook and maintained this gift until the end.

A private memorial service for family and friends will be held on Saturday May 4th, 2019 at 10:30 am at the Redding Cemetery in Redding, Iowa. Officiating the service will be Pastor Dirk Buffington. Service arrangements are under the direction of Andrew-Hann Funeral Home.

A second private interment service will be held later at the Foothills Cemetery in Longmont, Colorado.
Read Less

We encourage you to share your most beloved memories of Marian here, so that the family and other loved ones can always see it. You can upload cherished photographs, or share your favorite stories, and can even comment on those shared by others.

Plant a Tree in Memory of Marian
Plant a tree 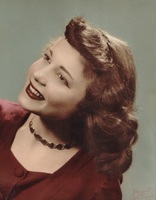