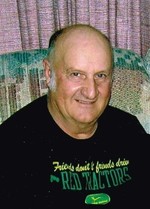 Marvin was born January 24, 1938 in Worth, Missouri, he was the son of the late Eldon Lorace and Mary Waunita (Phillips) King.

Marvin grew up in Worth, Missouri and was a graduate of Grant City High School class of 1956. Marvin had lived his entire life in Worth County except for the two years that he served in the United States Army.

Marvin began farming with his father as a child and continued farming having both livestock and row crops until his death.

He was married to Corena Alice (King) on November 16, 1958 in Kansas City, Missouri. They enjoyed 62 years of married life together.

Marvin was a born-again believer in Jesus Christ and was recently baptized.

He was preceded in death by his parents, infant twin sisters, a sister Judy Wilson and a brother Dale King.

Funeral services will be held 10:00 AM, Saturday, September 5, 2020 at the Andrews-Hann Funeral Home where social distancing measures will be observed.
Burial will be in the Barnes Cemetery, Worth, Missouri.


Arrangements are under the direction of the Andrews-Hann Funeral Home, Grant City