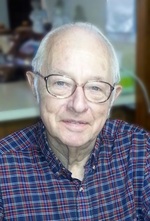 Wilmer Porter Dowis, 84, of Oklahoma City passed away after a courageous battle with cancer on Wednesday, June 12, 2019 at his home in the presence of his loving grandchildren.

He was diagnosed with bladder cancer in August 2017. Facing his foe with grace, courage, and dignity. He spent the last 2 years battling this implacable disease. He sought treatment, receiving chemo for the first year. He achieved some good news and temporary relief, but the complications with the disease and treatment soon continued their inexorable march. Although his illness made him appear frail, he possessed strength, perseverance, and an ability to overcome incredible odds and physical challenges. With his courage he led us to believe that each day is a blessing and an opportunity to create lasting memories, and that’s just what we did.

Wilmer was born in Sheridan, Missouri February 20, 1935 to Charles Goodwin Dowis, and Mary Etta Robb. He was the youngest of 2 children. He had an older sister, Judith Hope Dowis. He was a 1953 graduate of Sheridan High School. He would help his dad out on the farm growing up. He lived in Sheridan until moving to Omaha, Nebraska in 1953, where he worked for Wagner Electric. He took a job with General Motors in 1972, then transferred to Oklahoma City in 1979 where he retired as a supervisor in 1993. He resided in Oklahoma City until passing. Although he lived in Oklahoma City, he went back to the farm that was passed down to him. It is hundreds of years old and goes far back in his family history. He made the trip twice a year and would spend months down there at a time.

He married his childhood sweetheart, Jaunita Maye Walker on October 24, 1953. They had 58 wonderful years of marriage. They had two children, son Ronald Lee Dowis, and daughter Rhonda Lynne Dowis, who all sadly predeceased him. He was a devoted husband and father. A true family man, who always put them first. He was also a papa (grandpa, pop) to 5 grandchildren. He played the role of father for most of them, helping with their upbringing. He went on to be a great papa to 7 great-grandchildren.

Wilmer was an avid car lover. He would purchase a brand-new truck every year, same make, model, and color. He also had a fascination for clocks and collected many over the years. There are two things he would never turn down, kisses and sweets. He was a master mason of 50 plus years. Wilmer was a simple man. He was always quick to listen and slow to speak. He had the sweetest soul. He was so gentle, loving, and kind. He will forever be missed, but he planted a seed in us that will grow forever.

Wilmer is preceded in death by his wife, Jaunita Dowis; his son, Ronald Dowis; his daughter, Rhonda Dowis; his mother and father, Goodwin and Mary Dowis; his sister, Judith Dowis and other family and friends.

Wilmer will remain with us forever, as nothing can ever take away the love and memories, we hold dear. Although our hearts ache, we know he found peace while we wait to be together again.


Funeral Services will be held 10:00AM Wednesday, June 19th at Life Church, Midwest City, Oklahoma, directed by Moore Funeral and Cremation. A second service was held at 10:00 AM on Thursday, June 20, 2019 at the Sheridan Christian Church, Sheridan, Missouri assisted by Andrews-Hann Funeral Home.

Interment will be at the Brethren Cemetery, Sheridan, Missouri,