To share your memory on the wall of Marilyn Calhoun, sign in using one of the following options:

Marilyn attended Echo Dell country school and graduated from Grant City High School in 1951.
In April 1952 she married Jack Calhoun. They had spent 50 years together when Jack died in 2002. Jack and Marilyn had 2 children, Linda Marie Matson (Ron) and Allyn Duane Calhoun (Lois Plantenberg).
They lived many years in Grant City before moving to Pattonsburg, MO. Later, Jack and Marilyn returned to Grant City.

Besides her parents and husband, Marilyn was preceded in death by sister and brother in law Shirley and Bob Burress, brother and sister in law, Larry and Shirley Proctor and her niece, Sara Burress Hadley
.
Along with her children, Marilyn leaves behind her grandchildren, Jason, Justin, Ryan, Jessica, Sam and claimed grandchildren Brandon and Marissa. Also, great grandchildren Kalib, Fernanda, Alexa, Marcel, Asher, Ethan, Bekah, Jake, Aubrey, Avery & Bryce. Other survivors include her brothers Jim (Penny) and Steve (Marie) Proctor, sister in law Susie Proctor, brother and sister in law Paul & Louise Calhoun and many nieces, nephews, friends and church family members.

Marilyn will be buried at Mt Vernon cemetery, Grant City, next to her husband and near her parents and grandparents. Graveside services will be held Saturday May 30, 2020 at 10:00 AM. The Reverend Bendi Burgin will officiate the service. The family requests donations to either the Grant City or Pattonsburg United Methodist Churches, in lieu of flowers. Friends may call anytime at the Andrews-Hann Funeral Home in Grant City.
Read Less

Receive notifications about information and event scheduling for Marilyn

We encourage you to share your most beloved memories of Marilyn here, so that the family and other loved ones can always see it. You can upload cherished photographs, or share your favorite stories, and can even comment on those shared by others.

Posted May 29, 2020 at 09:04am
It is so hard to day goodbye to somebody who meant so much to so many people. There are so many memories, so much laughter, so many hugs and tears. She may have had only 2 biological children and 5 grandchildren, but she and Jack had HUNDREDS of children and grandchildren of the heart. I remember when Brandon was about 12 or 13, at the supper table I was talking about a conversation that I had just had with Marilyn on the phone. She had taken Jack to a Dr. appt, I think at the VA(?) and a doctor had stopped her in the elevator and talked about her scar. I don't even remember what the Dr. said now, but I was telling the story at the dinner table. Brandon got SO angry with me! He kept insisting that she had no scar. I was telling a friend at work the next day because Brandon was so mad at me. Tom said, Debbie, Brandon sees with the eyes of the heart. The eyes of the heart see only the beauty. Marilyn was like that. She either kept that childlike ability or had simply learned to see the world with the eyes of the heart. When Marilyn looked at you, she only saw the beauty in you and you knew how much you were loved. What a blessing.
Marilyn's faith was so strong and I know that she is rejoicing with Jesus at a huge party in Heaven right now, but I'm going to miss her so much.
Love to all the kids and grandkids. Remember the blessings!
Comment Share
Share via:
GS

Posted May 28, 2020 at 03:16pm
As a child, I remember the family reunions and picnics, really fun times, that brought our families together. Marilyn was always there gathering memories of relationships and events. She was always willing to share those memories that so enriched our lives. As the get-togethers got smaller and less often and families drifted apart, Marilyn became my family historian. She didn’t know a stranger. If you were family or the friend of a family member, she knew everything about you…. your birthdate, what school you attended, who your friends were, who you married and what your kids’ birthdates and names were. Marilyn always made you feel welcome and at home around her. She and her wealth of knowledge will be missed by everyone. 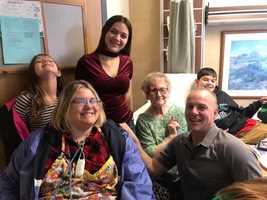 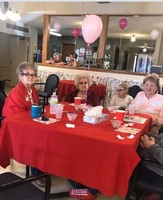 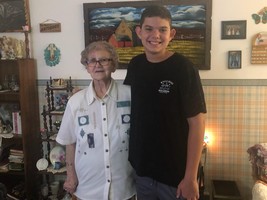