To share your memory on the wall of Richard Bateman, sign in using one of the following options:

Provide comfort for the family of Richard Bateman with a meaningful gesture of sympathy.

Print
RICHARD “Dick” BATEMAN died Wednesday, December 11, 2019, at his home in Kansas City, MO, where he had resided for the past twenty-eight years. He was 78.

Richard Allyn Bateman was born on January 21, 1941, in Maryville, MO. Mr. Bateman was the eldest of four children of Garland and Ruth (Murdock) Bateman of Parnell.

With a B.A. Degree in Music Education from Northwest Missouri State, Mr. Bateman made his career as a music teacher in Iowa, Kansas, Nebraska and Wyoming. In 1979, he took a full- time position in the Kansas City, Kansas Public School System where he was Band and Orchestra Instructor for 40 years until retirement. Among his many achievements in that district, he was most proud of the harp program which he started in 1986 with only two students. His harp program encouraged many students who became professional harpists.

Mr. Bateman was an active member of the local Lyra Chapter of the American Harp Society and was instrumental in forming the Kansas City Harp Scholarship in 2013.

Per his request, Mr. Bateman has been cremated under the direction of the Andrews-Hann Funeral Home. A private memorial service will be held at a later date.

We encourage you to share your most beloved memories of Richard here, so that the family and other loved ones can always see it. You can upload cherished photographs, or share your favorite stories, and can even comment on those shared by others.

Posted Jan 02, 2020 at 10:06pm
Mr. Bateman was the orchestra director at John Fiske School, where I served as the principal. He was an accomplished musician, but also a great role model to our students. I always called him the "Senator" as that is
how he presented himself. Very professional!!! He will be missed. My prayers to his family.
Comment Share
Share via:
PC

Posted Dec 25, 2019 at 06:32pm
Dear Jo and family,
I was so sorry to hear of Dick's passing. He was a sweetheart. I enjoyed his friendship while in college. Also, to see his success in music through the years. He will be missed.
Sincerely,
Paula Osborn Cummins

Posted Dec 17, 2019 at 09:26pm
I always enjoyed visiting with Dick down in the Bottoms on First Fridays. He always had interesting things to sell and great stories to tell. James McCalla
Comment Share
Share via:
WH

Posted Dec 14, 2019 at 08:09am
Sending my deepest sympathy for the lost of your dear Brother Richard. It was a special day meeting my distant cousin several years ago. My regret being I did not know him better. Remembering you in thought and prayer. Wilma Handlen
Comment Share
Share via:
GB

Posted Dec 14, 2019 at 03:35am
Bill and family - so very saddened to read of Richard's passing. It's not every day Heaven gets an skilled harpist, I know he'll be welcomed with joy! May your memories comfort you, and the love you share with him give you peace in the days ahead. Hugs & blessings to you all - Gayle
Comment Share
Share via: 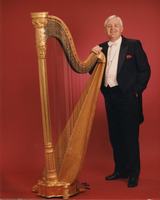